This is such a document, on the basis of which you are provided food grains, rice kerosene oil etc. by the government on subsidy. And along with this, this document is also known as your address proof.

How To Use of Ration Card

The Ration Card is one of the most important documents for a person residing in each of the states of India. This document is provided by the state government. Now, you can easily apply for Ration Card online and see Ration Card Status online.

The Ration Card for all citizens provides an important proof of identity and residence. It is necessary for making an domicile certificate, birth certificate, voter ID card etc.

You can also search your Ration Card by name, these are important documents to be used for taking advantage of all government schemes.

These Ration Cards provide recognition to the holder for the ration of subsidized food, fuel, or other goods issued by the Government of India. It is mainly used when purchasing subsidized foods such as (wheat, rice, sugar) and kerosene.

How to apply your state’s Ration Card and what documents are required for this, and from which official website do you have to apply online? We are going to give you all this information here. So complete the information given below.

This Ration Card issued by the Government of India helps you in all these things.

If you are a resident of Uttar Pradesh, then there is very good news for you people, the new UP Ration Card list 2020 has been released by the Uttar Pradesh government, in such a way, if you have added names to the ration card list in the previous year i.e. 2019. Can you check if your name is connected in 2020? Or you can also see if the UP Ration Card list 2020 BPL / APL includes your or your family name?

If you bill from any place in Uttar Pradesh, then you can check UP Ration Card list 2020 BPL / APL online only because UP Ration Card List District Wise has been made available on fcs.up.gov.in.

To perform UP Ration Card list 2020 BPL / APL check, you have to follow the procedure given below. 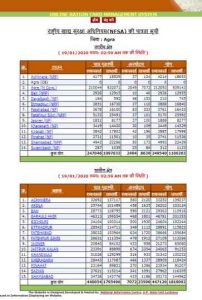 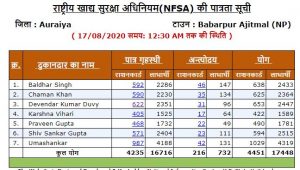 How to check your name in UP NFSA BENEFICIARY LIST?

RATION PRICE IN UP UNDER NFSA

Every person who is a Ration Card holder in Uttar Pradesh is given heavy exemption on ration and grains such as flour, rice, sugar etc. under the National Fertilizer Protection Act NFSA.

If you are from Uttar Pradesh and do not yet have a ration card, then you can apply for an up ration card, but you have to keep in mind that the application for the ration card cannot be done online, for this you can apply in your block You can do it by going or you can also apply by going to Sftp counter, let’s know its complete process.

If you are from Uttar Pradesh and are thinking that the ration card should be applied completely online, then it is not possible that you can fill the application form for the ration card only by yourself, it will be applied by your block.