Dear friends, the SWIFT code is a code that is used to transfer money internationally. As you know that when you send money inside India, use the IFSC Code there. Similarly, when sending money outside India. So Swift code is used for that.

What is Bank Swift Code?

As we are writing you a SWIFT code for example, in which SWIFT code you get information about which country and which bank this SWIFT code belongs to. 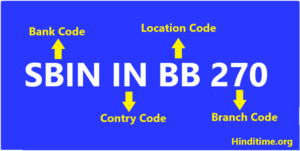 What are the benefits of swift code?

As you can tell, most of the people of India work abroad, besides many people travel from one country to another. And whenever they need money there or they have to send money to any of their friends, Reform or a company, they use the SWIFT code for this.

Sending money with SWIFT code is much easier and easier. All banks use SWIFT code, so if you have to send money anywhere, then SWIFT code can be very profitable and beneficial for you because it is your job to do international money transfer. It can come from this, money is transferred from one account to another.

As you can tell, all those working on YouTube and blogger in India require Swift Code because they have to give Swift Code for whatever they earn if they want to get it. That’s why most of the Swift code is used on YouTube of India or in addition to other countries like Youtube and Blogger.

How To Find Swift Code?

How to Find swift code online?

If you also get the SWIFT code online, then take it to the bank once and tell it in the bank so that the bank manager can help you in case of problems later.

If you are using Bank Swift Code, then firstly understand whether Swift Code is completely correct or not, because if your Swift Code goes wrong then your money goes to another bank and then that money is your It can get stuck because the bank takes 1 to 2 months to verify the payment, after that if the payment is not verified then the bank sends the money back from where the money came from. So when you enter the Swift code, enter the correct Swift code.

You have been sent money through the SWIFT code but you have not received it. What to do?

If your friend relative or any company has sent you money from abroad through SWIFT code but you have not received money, then in this case you have to contact the bank whose SWIFT code you have used.

Keep in mind that a separate department is created for the Bank Swift Code used in each bank, which keeps an account of the money coming from abroad when you go to that officer and tell him the transaction slip in it. Will show that which has been given to you by a company or your friend and relative. So that officer will verify your money and after verification, you can tell how long your money will be received or where it has been held.

An incorrect Bank Swift Code has been inserted, where will the money go?

But suppose you have used some other SWIFT code that is correct but belongs to another bank or bank of some other place, then you do not have to bother in that situation because those who use bank account numbers among themselves will use the money. It will be transferred only, but if it does not happen then, then you have to use the SWIFT code of the bank, you have to contact that bank, you will take some time and there will be some problem but the money will not go anywhere.